"Our adventurous hero promptly dashed in the castle, with absolutely no chance of survival."
‐ Minstrel song.

Click wisely and find your way through the unforgiving rooms of this small but unsafe palace...

Be prepared for a parody of medieval journey, and most of all prepare to face roughly 30 bad endings, some good ending(s), and special ending(s)!
5 music tracks will take you along this deadly expedition! 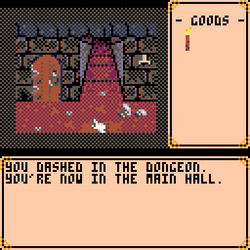 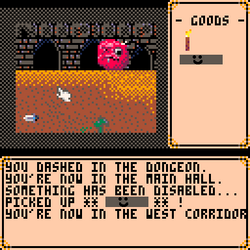 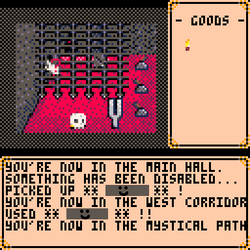 There is a hint page which might help you. However please note that it contains SPOILERS! It is broken down in several categories so that you could only use the tiniest necessary section, and only if REALLY NEEDED: ==> http://anto80.free.fr/?id=keineged-hints

[Speedrun] Know that you can complete this game in less than 30 seconds (even the perfect ending).

You liked this game ?

Please share your best times in the comments.
I would also really appreciate if you click on "support this game".
Thanks for playing!

You want to write/stream something about this game?

Look at this presskit where you can download GIFs, read the story behind, full description etc...

From a learning perspective

This game was made with the wonderful Pico-8 engine.
In this pico-8 source code you will find examples of:
- Mouse management (position, click , hover, hold, and multiple mouse cursors)
- Cartridge data management : save/load scores and stats (filedata can be stored in browser cookie!)
- Linerays and flare effects (during title screen)
** Bonus: .p8 file also contains unused music and sound assets! **
To access to the source code you need to support by donating at least $1.99 USD.


Who is making this ?

Sylk for Excellent English proofreading, betatest, and good specific ideas. The third Scorpion is fully dedicated to You. *** You rock!! ***

“Keineged an nor is an adventure game of high speed experimentation that will result in many a goofy end, but its silly deaths make for a great deal of fun. Figuring out the one route on each screen that won’t kill you offers frequent laughs at the absurd ways one can pass on.”
— Joel Couture on IndieGames+

Hey! It might've taken me a little while to get this video out, but I finally did it! Here it is!

Hey Meowium99! Thank you so much for trying!
For your information it seems to bee an outdated version. In the current online version, there is an additionnal clue displayed when you click the sword 2 or 3 times (and when you did that à 6:00 ) it did not show up.
Maybe this will make it possible for you to progress even more !
Anyway, thanks again and thanks for your time!

Maybe that's a help of some sort...

Anyway, thanks again and thanks for your time!

I just want to say, this is a great game, but now I am double clicking for some reason, even if I am only clicking once. Maybe something wrong with my OS or browser. I am on Chrome OS using default Chrome Browser.(Version 77.0.3865.105 Official Build 64-bit). Very annoying and confusing.

About your issue, I tested earlier on Chrome (Version 73) on Windows 10 (I don't have Chrome OS) and I was unable to reproduce the issue you mentioned (even if I click on the red monster when it is in front of any door). I often use Firefox, and with Firefox on Windows 10 I never had this problem either. Since I don't have the problem it's tricky for me to debug.

Do you encounter the issue always in the very exact same moment or does it seem to be random?

Could you please also tell me if the executable version also have this issue? You may download executables for Windows/MacOS/Linux.

I haven’t been able to go too far, and I believe that it was at the same spot

This is a great game, but whenever i click theres a high chance that it clicks more than once, and it leads to a lot of annoying deaths.

As for the bug you mentioned, could you be more specific where it occurs ? (are you using an item and which one?) I tried my best to prevent undesired multiple clicks but some cases may remain...

I've only got to the third room, but  it happens in the second and third room while using the rock for the, er, monster, and the key and sword respectively.

Thanks for your reply. OK, could you try to use right button instead and see if the behaviour is the same?
Btw what are your browser and OS?
Thanks.

Sorry for the late reply, but i am using chrome on the chrome os, and thank you for the suggestion!

Hey Inferno, thanks for your patience.

I just tested on Chrome (Version 73) on Windows 10 (I don't have Chrome OS) and I was unable to reproduce the issue you mentioned (even if I click on the red monster when it is in front of any door).

I often use Firefox, and with Firefox on Windows 10 I never had this problem either.

Since I don't have the problem it's tricky for me to debug.

I know that there exists some other ways to publish Pico-8 games, for example by providing a binary executable which must be run on your computer. Maybe with this workaround the problem could be solved. Unfortunately I don't have any experience with this kind of Pico-8 publishing. Are you interested in testing it as an executable? Here's what I can do https://pico-8.fandom.com/wiki/Export

Really great game! I thoroughly enjoyed playing this and loved all the individual deaths you put into it! So glad I managed to get the scorpion you told me about too! I can tell you worked so hard to make this and you did an amazing job! Thank you for asking me to play it, I had an absolute blast and loved it (even though I also hated dying so many times too) :D

Thank you so much for your kind words! 😊 You did a magnificent job too! Your progress was suspenseful! I'm glad you enjoyed that much! Thanks for your time and your help spreading the word!

I had a lot of fun with this game!! Even though I didn't get some of the other endings (I probably will later).

I got all the endings. Neato!

The game is a ton of fun! Short once you figure everything out, but leading up to that point, expect to die a lot! I don't think I've clicked my mouse so many times in one sitting. The game definitely helps develop quick thinking, and observation. Check everything, but also be cautious of what you do check, because 9/10 times you die.

The art style hits the nail right on the head for that retro point 'n' click adventure. Really a joy to play, and it's free nonetheless. Though, I'd definitely throw a couple bucks at the dev for the work that was put into it.

My gosh, i don't think i died faster in any other game so far, and i have been playing games since mid 90's, literally just started the game and died, that's pretty mean! It's like the "Hero" has the worst luck possible and is also very Fragile, i mean two torches would be too hot, lol!
Overall it's a good little game even with the fact it's not my style of game, but it's art style reminded me of some nostalgic game i have been played in the past, especially Castle Master, for me that game was so frightening no other game got closer to that.

Because of Humor, Idea and Nostalgic value i give it a Score of 6/10, if it would be my genre it would be a solid 8/10, I think i may be too old for this type of genre and i am also tending more towards Sadistic than masochistic (mean's i want to kill more than i want to be killed;-)

Great little game ! I love how the speed of the game forces you to do things rather than think too much about them. You just try until it finally works. And even though it can get frustrating, each trap overcame get really satisfying.

Super fun game! Unfortunately I had just woken up before playing it and my coffee hadn't really kicked in so I wasn't really fast enough for just how fast paced this game is, nor could I really figure out what to do next. Anyways, I loved the style, the gameplay is pretty hilarious. Maybe I might pick it up again when I'm having a good, energetic day. Here's my video, hope you enjoy!

Thanks for asking me to play this game, what a torture it was! But how great it felt when I finally had gotten out!

This was fun! It brought back memories of Shadowgate, and of the parody/meta things that used to pop up a lot on Newgrounds like the Impossible Quiz.

Good work -- liked discovered the endings and figuring out the puzzles a lot. It would have been nice to be able to use right-click to exit the death screen, though.

Thanks a lot for making this video! Good job on finding the Debug Mode ! :D

Really enjoyed playing the game even with all the deaths and looking forward to what you will make next.

I love the amount of details you put in there.
Especially the keypad tones cracked me up. I came to noticing them when I furiously mashed the C key out of despair and heard the music play. The tension of the instant and the rushing stress combined with that stupid tune made me laugh out loud.

Thank you for that wonderful Pico-8 game!

Thanks a lot for making this very kind comment :'-)
and most of all Congrats for having found these "secret" keynotes !! :D
Glad you liked the game and that it made you laugh out loud!

With its quirky sens of humour and merciless gameplay, this game is nearly impossible to rate. Sure, it  won't suit the taste preference of the majority of gamers nowadays. Still, this game is a gift with no malicious intent. It's a gift with a very exhaustive page of hints, because the game designer genuinely wants you to have fun and, in the end, to win, to beat their game. It's a gift meant for a niche audience of gamers opened to self-derision and highly imaginative parody. These blessed few  will be able to increase tenfold their sensation of accomplishment when they reach an interesting end, because what they draw from overcoming difficulties is determination instead of frustration and anger.

If the journey isn't more important than the destination to you, you should probably move on to another game. Well, to each his own!

Super Fun game to do with friends and trying to find all the endings !

Instructions unclear, couldn't stop the dancing scorpion from overtaking the world, should have immolate with it. 5/5 great tuning fork.

Great little shout out to Shadowgate. 20/20, would get trampled by gorillas again.

i can see some people getting really angry with this

btw fuck you rating 1 star shit game made me mad >:(

Reply
Fantome a Rayures2 years ago(+4)

Completed with all endings! That was pretty fun :D 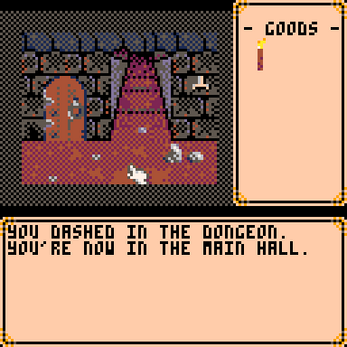 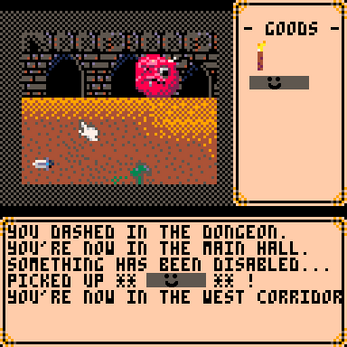 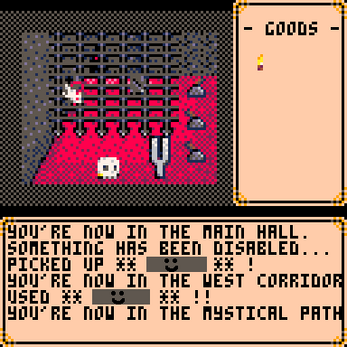